How the Ear Works 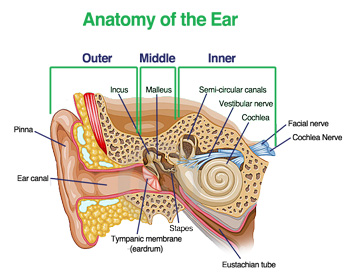 How the Ear Works

The hearing system is a complex system in the human body. The rhythm of sound turns into the sound of physical stress, music, emergency signals, natural sounds, and the meaning of interacting with others. This is achieved by the precise mechanism of the lever, the ratio of complications, and the results of electrochemical reactions. As a simple example, the ear can be divided into three main parts, called the outer, middle, and inner.

The outer ear echoes the noise around us under the corner. The outer ear consists of a pin (two pieces on the side of the head) and the ear canal. They act like an echo that increases the specific frequency or frequency of the sound before it reaches the eardrum.

is where the sound is changed from pressure waves to mechanical energy. The eardrum (tympanic membrane) is made of layers of skin, which are stretched tight like the top of a drum. As sound enters the ear canal, the eardrum begins vibrating sympathetically. Attached to the eardrum are three tiny bones or ossicles called the hammer (malleous), anvil (incus), and stirrup (stapes). Their job is to transfer the vibration of the eardrum to pressure waves in the inner ear. The relative area ratios (tympanic membrane to the footplate of the stapes) and lever action of the bones themselves (nearly 14:1), help to further amplify the signal, allowing humans to hear even the softest of sounds.

nerves make sounds as they transmit to the brain. The inner ear, called cochlear,  is a bone maze filled with flu that houses thousands of hair follicles. The hair cells recognize waves of working pressure and transform them into electrical impulses for the brain and interpret them.